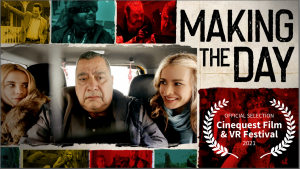 Making The Day, a heartwarming & hilarious feature starring Steven Randazzo and Juliette Bennett, will have its NYC premiere at Village East Cinema on 8 April

I thought the film was terrific, very funny, heartwarming, and in some instances, all too true. The cast was wonderful, especially Juliette, and it’s well-directed.”

NEW YORK CITY, NY, UNITED STATES, March 31, 2022 /EINPresswire.com/ — Presented by MCM Creative and Directed by Michael Canzoniero (Wedding Bros, Don Peyote), Making The Day is the story of a has-been character actor (Randazzo) who attempts to complete a movie honoring his deceased wife when divine intervention leads him to a free-spirited actress (Bennett) who might just be his perfect leading lady. The film perfectly captures the community spirit of New Yorkers coming together to help each other out in tough times.

When the Making The Day trailer was initially released, it garnered incredibly positive buzz. Watch the trailer here https://www.youtube.com/watch?v=eD1-VLKgpg4

The film will be open to the public from April 8-22, 2022, at Village East Cinema, located at 181-189 Second Avenue in New York City. Interested media who wish to interview the director & cast contact Adam Nelson, CEO Workhouse via [email protected]

TRUE STORY! Art imitates life in this genuinely charming and quirky film about making a film, chasing your dream, and never giving up. In the case of Making The Day, the inspiration behind the film’s narrative was provided by lead actor Steven Randazzo’s real-life struggle with underground film financiers “coming after him” for an incomplete movie while the film was in production. During the filmmaking process, Michael Canzoniero, the movie’s director, employed a hybrid-narrative/documentary process called “organic filmmaking,” where elements of the actors’ real lives were incorporated into a heavily improvised shoot.

Making The Day was produced by Ellyn Vander Wyden, Tim Dorsch, and Francesco Ros and edited by Michael Berenbaum (Sex and the City, The Americans, Barton Fink, and Marry Me starring Jennifer Lopez.) The script was co-written by Michael Berenbaum and Michael Canzoniero. The film features an original score by Peter Nashel (I, Tonya, Marco Polo) and an original song by composer Gabriel Berenbaum. For more visit, https://www.makingthedaymovie.com

I thought the film was terrific, very funny, heartwarming, and in some instances, all too true. The cast was wonderful, especially Juliette, and it’s well-directed.” – Frank Marshall, Co-Founder, Amblin Entertainment and Kennedy/Marshall Company and Producer (Indiana Jones, The Curious Case of Benjamin Button, Signs, Jason Bourne, Jurassic World).

I believe that the chemistry between the lead actors is the most critical element of a quality movie. I’m thinking of DeNiro and Grodin in Midnight Run, Benigni and Waits in Down by Law, or Lopez and Clooney in Out of Sight.

“The magic of the film’s ending only happens because of the journey these two have gone through in the pressure cooker of trying to make a movie together.”

If that lead actor dynamic is combustible, if that pairing can create sparks, there’s magic on-screen that all the big-budget CGI in the world can’t compete with. So in the case of Making the Day, my co-writer Michael Berenbaum and I began not with a script but with an attempt to “organically” build a story around the hysterical energy that we had discovered between Steve Randazzo and Juliette Bennett in some of our early workshop exercises. To us, their performances were like gasoline and tinder in almost every scene: Steve’s a totally grounded, everyday guy, downbeat and desperate, while she’s a spinning top of almost manic energy, with an innocent optimism that is both contagious and comedic. The magic of the film’s ending only happens because of the journey these two have gone through in the pressure cooker trying to make a movie together. After all the laughs the movie delivers, I still get a lump in my throat every time I watch that last sequence play out. —Michael Canzoniero, Director, Making The Day

The Village East Cinema is located in one of New York’s last Yiddish theatre buildings, a New York City designated landmark; it is listed on the National Register of Historic Places. The main auditorium seats 1,200, and there are four small screening rooms in the basement, each seating under 200 people, and two other screens in the former backstage area that shows a mixture of Hollywood productions and indie films. Tickets can be purchased at the Village East Cinema Box Office or Fandango.

MCM Creative is a full-service production and post-production company with over twenty years of experience in the New York market. MCM Creative produces and shoots narratives, documentaries, live shows, music videos, and interviews. They are known for their feature films: Don Peyote, Wedding Bros, and the award-winning documentary Shelter Island. MCM Creative is represented by Authentic Talent and Literary Management. For more information, visit https://www.mcmcreativeproductions.com