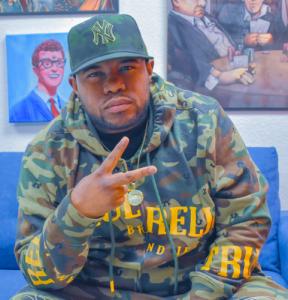 Cornerboy Gunner and the Cornerboyz are set to inspire and empower listeners, as they encapsulate the raw, burning, and authentic narratives of the streets

VICTORVILLE, CALIFORNIA, UNITED STATES, March 22, 2022 /EINPresswire.com/ — Cornerboy Gunner is more than just an artist diligently making a name for himself in Hip Hop and Rap. The eclectic powerhouse represents a movement behind him- to unveil the true sides of the lives lived by many around him.

A Westcoast artist who is charged with the passion to bring real rap back, Cornerboy channels versatility in lyricism, and realistic and relatable storytelling to inspire and captivate listeners. Together with his Cornerboyz Music Group, the artist takes on a hardcore approach to take the genre back to its original sense.

With a rich and immersive discography that includes tracks such as, “Miss Me”, “High Roller”, “All the Time”, and “Never”, among others, the talented powerhouse hopes to create music that delivers the true voices of the streets- shedding light on the lives of hustlers and people trying hard to better their lives out of poverty.

Much of Cornerboy Gunner’s lyrics and song writing is based on true events of his life, childhood, family, street life, hustling and simply the good times spent with his friends.

Gunner was always inspired by the work of icons of Hip Hop, such as Ice Cube, Tupac, and Jay-Z, and also counts his team and family among his motivations.

Cornerboy Gunner’s music exudes a unique ethos, which is underscored by a rich, immersive, and raw sound and flavor. His released albums, include the record, “Running Laps” which was dropped in 2021, and the EP, “90s Vibe” which he unveiled recently.

“My future goal and the plan is to bring the west coast into the mix with everything…everybody has their sound- the south, the east coast. It is our time to show the world that we have a lot of talent on this region,” says Gunner regarding his musical style.

Google Cornerboy Gunner, I.N.G Savii , St-Dubb , Sliime Dior, and stream the Cornerboyz music and videos that are available on all official music platforms. Reach out to the artists at [email protected] or follow Cornerboy Gunner on Instagram Cornerboy_Gunner for updates on new music.

Cornerboy Gunner is a rising, motivated, and talented American artist, singer, and song writer. Gunner began his musical trajectory after getting a penchant for rapping when he was 9 years old. Ever since, the artist has continually grown and succeeded in his Rap endeavors since 2011.

Gunner’s closest friend Federal Mav gave him a shot in the studio and showed him the ropes, inspiring him to pursue music professionally. Together with the Cornerboyz, the artist has continued to lead by example and become a positive influence on the people around him. An authentic force who brings about an exciting hip-hop twist, with an experimental southern flavor, Gunner is set to succeed. He is currently working on his upcoming album, titled, ‘The Gunman’, and remains hopeful that it will create all the noise it deserves.